Menu
From The Blog

Cooking Oil: it’s ubiquitous in our Western lifestyle. We use it every day from stir frys to salad dressings. But the sad truth is that most cooking oils don’t deserve to be in your kitchen or in your food…
Tweet
Share
Pin
Share
0 Shares

If you are anything like me, you probably have a bottle of olive oil in your kitchen cabinet right now. Or maybe you’re into avocado or coconut oil. What I’m about to share with you today is even better than those cooking oils I just mentioned.

In a hurry? This is our #1 pick for the healthiest oil to cook with: 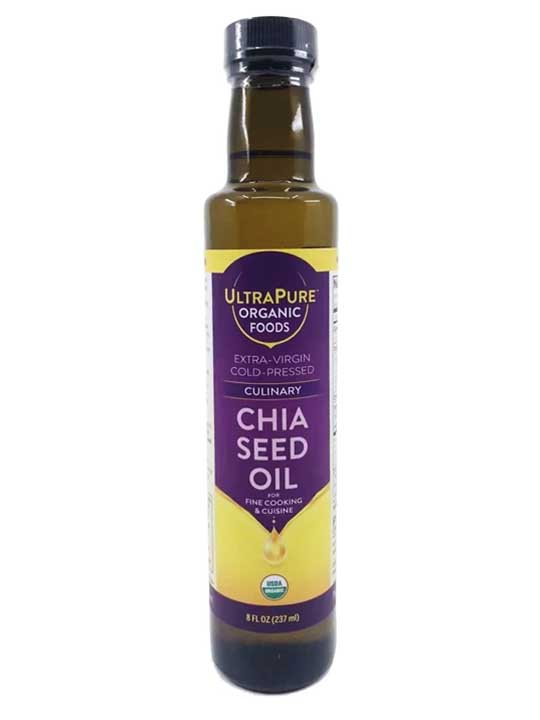 But there’s a problem (actually several problems) with all of these cooking oils.

They all contain exceedingly high levels of omega-6 with little or no omega-3 to balance the ratio.

Why is this bad you ask? Read on to find out!

Why most “healthy cooking oils” are actually bad for you

The standard diet consists of far too many omega-6 fats and that’s causing epidemic of inflammation in the body. And inflammation is one of the underlying culprits of many diseases in Western society.

The proper balance of omega-3 and omega-6 is incredibly important. Unfortunately, many of these so called “healthy cooking oils” are loaded with omega-6 but very little omega-3.

Western diets are deficient in omega-3 fatty acids, and have excessive amounts of omega-6 fatty acids compared with the diet on which human beings evolved and their genetic patterns were established. Excessive amounts of omega-6 polyunsaturated fatty acids (PUFA) and a very high omega-6/omega-3 ratio, as is found in today’s Western diets, promote the pathogenesis of many diseases, including cardiovascular disease, cancer, and inflammatory and autoimmune diseases, whereas increased levels of omega-3 PUFA (a low omega-6/omega-3 ratio) exert suppressive effects.

Why is Omega-3 so critically important for good health and well-being?

Omega-3 is vital for brain, mood, energy, heart, and digestive health. It’s even more vitally important for moms to be as numerous studies have shown getting enough omega-3s during pregnance has profound benefits including higher intelligence and better communication skills.

Heart disease and stroke is one of the leading casuses of death. Omega-3s help people with cardiovascular disease in numerous ways including a reduction in triglycerides, reduction in blood pressure levels, and has shown to be effective at keeping the arteries free from damage by preventing plaque build up that harden arteries.

As you can see, it’s absolutely essential you are consuming enough omega-3 from food because your body simply cannot make it.

Cooking oils like safflower, sunflower, sesame, soybean, and canola have some omega-6 but virtually zero omega-3.

What to look for in a healthy cooking oil

Now you understand you must pay attention to the omega-3 and omega-6 ratios in cooking oils (or any nutritional oil for that matter). Always strive for balanced omegas (omega 3 and omega 6).

But what else should you consider?

Make sure your cooking oil is “cold-pressed” whenever possible.

The term “cold-pressed” refers to the way the oil was processed from it’s original source. Oils that are cold-pressed are pressed at very low temparatures which ensures the oil retains all flavors, aromas and nutrients that would otherwise be destroyed by high heat.

Nutrition should be the primary reason you consume oil with aroma and taste being secondary.

To ensure the nutrition of the oil is not destroyed, Smoke Point is vitally important in deciding a healthy cooking oil.

Smoke point refers to the temperature at which the oil starts to break down and lose its nutrients and flavor. When you see smoke rising from the oil, you know you’ve exceeded its smoke point.

Some cooking oils have smoke point for frying while other oils are only suited for use as a salad dressing.

Bottom line: You should look for a healthy cooking oil that is balanced in omega-3 and omega 6, cold-pressed and has a high smoke point when using it as a culinary cooking oil to ensure your body gets the optimal nutrition the oil is intended for.

By now you’re probably thinking there’s no such thing as a perfect cooking oil that can be used for cooking, on salads or taken RAW (my preffered method) and has a high smoke point, is cold-pressed, TASTES DELICIOUS and is insanely abundant in Omega 3…

If you search online, you would conclude there is not such thing…

After searching for the healthiest cooking oil for me and my family, I was convinced it didn’t exist…

But now I wake up every morning with this “secret” bottle of oil that’s given me an abundance of energy, tastes amazing, is loaded with omega 3, is good for the planet, cold-pressed and (to my surprise) has the highest smoke point of any of the oils tested!

You may have heard about the amazing benefits of Chia Seeds and how they are loaded with omega-3, protein, fiber, vitamins and minerals.

The ancient meso americans cultivated this plant (Salvia hispanica L.) for thousands of years. It’s nutritional benefits were left undiscovered until the last decade or so.

Then my friend Marc introduced me to this amazing oil, cold-pressed from ultra-pure Organic Chia Seeds. When we sent it off to the lab, the results blew us away. Not only was this oil rich in omega 3 fatty acids, it’s smoke point was higher than sunflower oil, canola oil, olive oil and coconut oil – these are some of the most popular cooking oils!

But it gets even better…

When we started to cook with it, we noticed the taste was completely neautral and made our dishes taste amazing. Plus we could rest easy knowing this oil had the proper ratios of omega 3 to omega 6 (super rich in omega 3 which was lacking in our diets).

It gets even better…

The chia seeds used in the chia oil we tried are USDA Organic, GMO-Free, and guranteed pesticide free. This is the only chia oil lab tested for purity that we found.

When I spoke with the founder Marc, he said each batch of the chia oil is cold-pressed and the seed selection goes through a rigorous lab testing process “We test for more than 300 agricultural pesticides and accept nothing but PESTICIDE FREE, including glyphosate, paraquat, and diquat which other companies don’t.”

Now our family can rest easy knowing the oil we use to cook with, pour on salads or take in the morning as part of our detox regimen, exceeds all of the criteria we believe to be in a healthy cooking and nutritonal oil.

To learn more about this exciting new Chia Oil, click here and you can save up to 25% off while supplies last.

Have Questions? We'd Love To Hear From You So Please Leave A Comment Below!